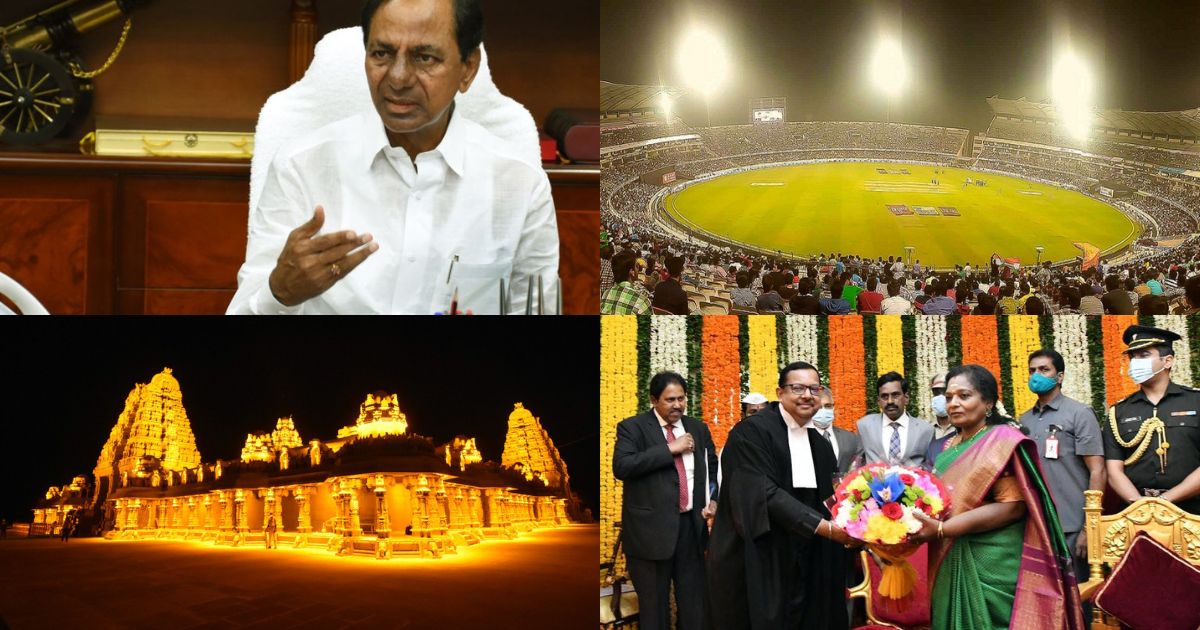 Shutdown of schools due to COVID Omicron, the sacred “Sammakka and Sarakka Jathara,” and the inauguration of the 216-foot Ramanujacharya statue.

T-Hub 2.0, the hub of IT startups, was established. Nikhat Zareen’s three medals in boxing this year made us all proud. The Agnipath plan caused secunderabad to experience gloomy shadows of unrest. TRS ends, and BRS enters national politics

The year 2022 did not begin well; the state was infected with COVID Omicron. Schools and educational institutions were closed; they were reopened at the request of the children’s parents.

The biennial Medaram fair was held with grandeur. The government has made preparations by spending approximately 100 crores. More than 1.5 crore devotees flocked to the fair, which was held in a frenzy.

A 216-foot statue of Ramanujacharya was installed at Muchinthal. inaugurated by Prime Minister Narendra Modi. It has 108 divine temples that are moulded to match the actual temples. It is named as “The Statue of Equality.”

KCR, the chief minister, inaugurated Mallanna Sagar, which was constructed in the Thoguta-Kondapaka mandals in the Siddipet district, in February. The state was the beneficiary of the initiative. CM KCR used the water from this reservoir to wash Lord Mallanna’s feet.

At a cost of over Rs. 400 crore, the second phase of T-Hub 2.0 is being built, and all the facilities required to launch 1500 businesses have been set up. This initiative was launched and dedicated to the nation’s youth by Chief Minister KCR.

Chief Minister KCR inaugurated the Yadadri Shri Lakshmi Narasimhaswamy Temple after the successful completion of its renovation in accordance with special pujas and customary procedures. CM conducted Samprokshan and yagas at the new temple. Devotees were given the chance to see the recently built temple.

A phenomenon during the Commonwealth Games is Nikhat Zareen. She triumphed in the finals and took home the gold medal. Nikhat was born in Telangana’s Nizamabad.

Every 12 years, Prahanita Pushkaras occur in the state. Thousands of devotees came to the sacred bath, which was held in April for around 12 days.

This year, a new Chief Justice was appointed to the Telangana High Court. In June, Justice Satish Chandra Sharma underwent a transfer. In his place, Justice Ujjal Bhuyan was chosen.

Riots took place in Secunderabad Railway Station in protest against the newly introduced Agneepath scheme, under which the candidates will serve the armed forces on a contractual basis. Agitators gathered in large numbers and set the train on fire. An aspirant named Rakesh died.

KTR has come down to Basra

The students’ protest at Basara IIIT has caused quite a stir. The students carried out a hard-fought protest amidst the rain and sun, and at last their protest went fruitful as IT minister KTR came down to know the issues faced by them.

The most advanced technology was used to build the Integrated Police Command Control Center, which connects all the departments unlike any other place in the nation. On August 4, Chief Minister KCR gave it his approval. constructed at Banjara Hills, Hyderabad, across 20 stories. The state’s CCTV cameras are all connected. Furthermore, 1 lakh cameras may simultaneously watch the Baahubali screen.

The Indian government has proposed celebrating 75 years of independence as Amrit Mahotsav. But, since KCR was already out of touch with the Center, the talk of an independent Vajrotsava came to the fore.

The celebrations started on August 8th, and programmes like the display of national flags, mass singing of the national anthem, distribution of national flags from house to house, the freedom run, and freedom rallies were held for 15 days until August 22nd.

At Hyderabad’s Uppal Stadium, an international match involving Australia and India finally took place after almost two years. Due to uncertainty in the ticket sale, there were few injuries during the rush at the gymkhana grounds.

Hyderabad is in uproar over the casino incident. The ED investigators discovered that a man by the name of Chikoti Praveen had invited the elected officials of Telugu states overseas to play casino games. It is believed that the money obtained illegally was obtained through hawala.

After family planning procedures in Telangana went wrong, four women perished. Sterilization-related deaths raised a commotion. Action was taken against the doctor and those accountable as a result.

One of the Komati Reddy brothers, Rajagopal Reddy, left his position as an MLA and joined the BJP. Plans by KCR to undermine the BJP in the election were successful. The Left parties, Jagadishwar Reddy’s constituency associations, and Minister KTR’s adoptive assurance helped TRS end the triumph.

A 10% reserve for tribal people was one of the pledges TRS made before taking office in the state. KCR said that the Center was using a heavy hand after assuming power, yet TRS enacted that measure during the by-elections. It has been declared that it will be put into effect right away.

The recruitment fair has finally started in Telangana. The Chief Minister announced in the assembly that more than 80 thousand job vacancies will be filled.

Chief Minister KCR, who has been defying the Center’s stand for many days, has stepped into national politics. The Bharatiya Rashtra Samithi office opened in Delhi. “Ab Ki Baar Kisan Sarkar” is the slogan.

Ever since the election of Revanth Reddy as PCC President, there has been some sort of controversy in the Congress Party. Jaggareddy case, allegations against Manikkam Tagore Recently, there has been a stir among senior leaders in the matter of postings.

Hyderabad has become the venue for international Formula racing competitions. Due to the initial commotion, Necklace Road’s contests were called off. They then restarted and ended in a fairly disorganised fashion.

How I can become like Adani, whose wealth skyrocketed 14 times in 2 years? Ask ChatGPT to answer this and a few other funny and interesting questions.