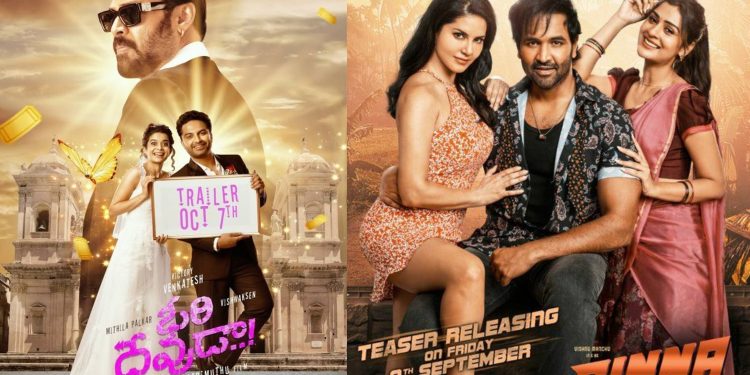 The Dasara season has been quite disappointing for Tollywood as the films released during this time have not lived up to the expectations of fans. Except Chiranjeevi’s “GodFather”, other releases like “The Ghost” and “Swathi Muthyam” bombed at the box office.

As the Diwali season is inching closer, two big Telugu films have already booked their slots. Two mid-level heroes, Vishwak Sen and Manchu Vishnu, will test their fate at the box office on Diwali. Vishwak Sen will release his rom-com “Ori Devuda,” while Manchu Vishnu will release his action comedy “Ginna.” In addition to these films are two major Tamil dubbing movies, i.e., Karthi’s “Sardar” and Siva Karthikeyan’s “Prince,” which will also be released on the same day as “Ori Devuda” and “Ginna.”

If the reviews come out positive for ‘Ori Devuda’, Vishwak Sen’s flick could have an upper hand among all these flicks, as Vishwak is quite popular among the Telugu youth, while Manchu Vishnu has been struggling for a solid hit for years.

The fate of the dubbing films “Prince” and “Sardar” will clearly depend on word of mouth and screen count. Let’s wait and see how this Diwali season turns out for Tollywood.