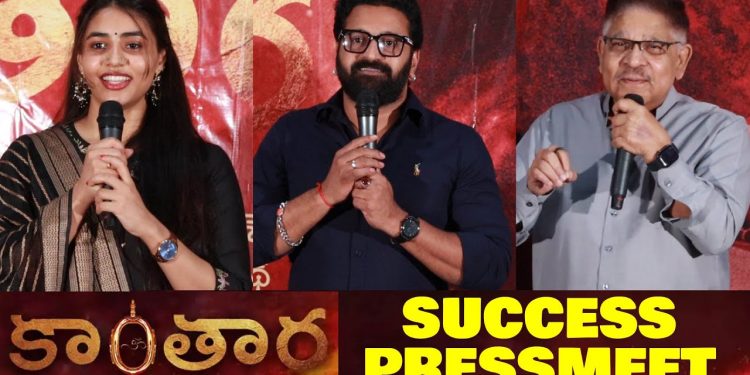 Rishabh Shetty and his team are currently basking in the staggering success of their latest film, “Kantara.” The Kannada actor and his team took part in the success meet of their film today in Hyderabad. Producer Allu Aravind also graced the event.

Rishab and his team thanked the Telugu audience for loving their film so much that it crossed the 20 crore mark in just 5 days. The actor said that ” I thank the Telugu audience from the bottom of my heart for making Kanatara a massive success. This means a lot for me and my industry. Your love gave me immense confidence. We will work hard even more on our future projects with this boost. ” He also thanked Allu Aravind for lending his support by releasing his film in Telugu.

In a statement to the media, Allu Aravind praised Rishab and his team for their accomplishment. Additionally, the renowned producer claimed that he asked Rishab to make a movie for his company, “Geetha Arts.” Even though he stated it with glee, Aravind’s remark got the crowd riled up. Rishab confirmed that we didn’t have a detailed discussion, but he added that if the project actually went through, he wouldn’t turn down the producers’ offer.