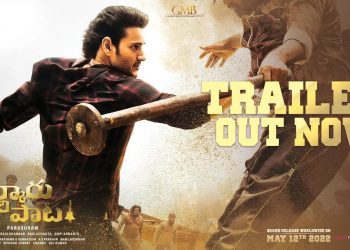 ‘Sarkaru Vari Paata,’ starring Mahesh Babu, is Tollywood’s most awaited upcoming film. From the moment it was announced, this film has shattered a slew of records. Early impressions of this picture, such as posters, teasers, lyrical videos, and the trailer, have created a lot of buzz. Due to its massive hype, expectations for this picture have skyrocketed. Meanwhile, this film set another record even before its release.  Let’s have a look.

A record feat on Bookmyshow

Bookmyshow is a website where you can buy movie tickets online. This website performs a poll to estimate public interest to see this film in theaters. The number of votes for Sarkaru Vaari Paata films has reached an all-time high. More than 420,000 people voted for this film by clicking the “like” button. ‘Sarkaru Vaari Paata’ is one of the few Telugu movies to do this.

RRR, Rajamouli’s most recent blockbuster, has over a million likes on Bookmyshow. Despite the fact that 1 million is a large number, RRR is a pan-India release. A pan-India film with 1 million likes is different compared to a film which is meant only for Telugu Audience. Meanwhile, ‘Sarkaru Vaari Paata’ is a regional release, but 4.2 lakh people voted for the film even before it was released. This number reflects the upcoming film’s popularity. ‘Sarkaru Vaari Paata’ would have easily surpassed RRR’s record on Bookmyshow if it had been a pan-India release. The film’s release is still two days away, and the number of likes for ‘Sarkaru Vaari’ Paata could skyrocket within these two days.

Sitara, Superstar’s super daughter, is rumoured to have a cameo appearance in this upcoming film. In the lyrical video for this film’s ‘Penny Song,’ the makers highlighted Sitara.Parasuram directs this highly anticipated upcoming film, which is co-produced by GMB Entertainment and Mythri Movie Makers. In this film, Mahesh Babu and Keerthy Suresh play the lead roles. On May 12th, ‘Sarkaru Vari Paata’ will be released.