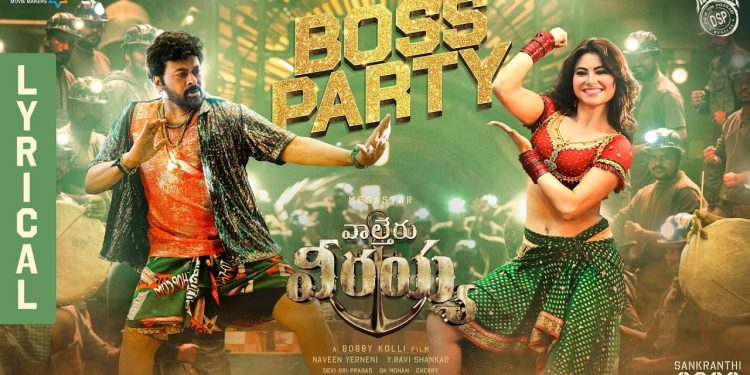 The first single, “Boss Party,” from Waltair Veerayya is out now. The song’s sneak peek, which was made public yesterday, has become popular on social media as meme fodder.  The makers have dropped the full-length lyrical song on YouTube today.

This song by Devi Sri Prasad seems unimpressive when compared to his last successful album, “Pushpa,” but it’s still a good dance song overall from DSP.  The vocals of Nakaz Aziz and Haripriya were bright, but DSP’s hook vocals don’t sound fairly great. The lyrics Devi wrote are passable. For Chiru’s legwork, the track moves softly and without any high movements. The choreography is done by the shekar master.  Urvashi Rautila, a Bollywood beauty, will dance alongside Chiru in this item number.

‘Waltair Veerayya’ is directed by Bobby and produced by the Mythri movie makers. Konavenkat has penned the screenplay. Shruthi Hassan and Catherine Tersea are playing female leads in this film. The flick will hit the theaters in the 2023 Sankranthi season.