by V Kumar
in Cricket
0 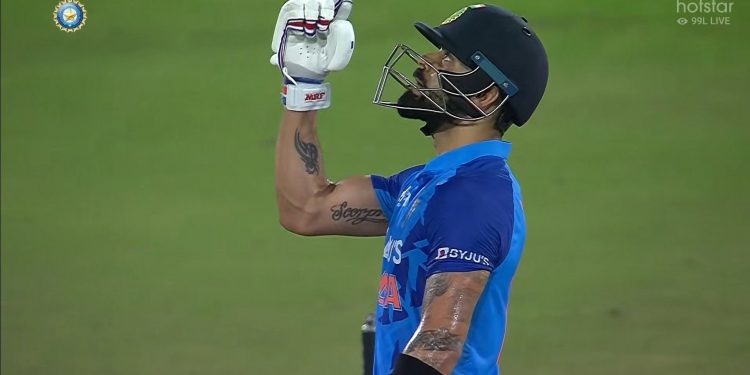 The third Twenty20 International between India and Australia took place yesterday at the Rajiv Gandhi International Cricket Stadium. The city of Nizams has been completely overrun by cricket fever. The Uppal stadium is filled with people as it hosts an international game for the first time in three years. The match was attended by about 50,000 people, with the stadium being completely sold out. Through their yells and jubilation, the audience has lit up the arena.

Team India dominated the match and defeated the Australians handily by chasing the 187 run mark with one ball remaining. King Kohli keeps up his hot streak in this game. For Kohli, the stadium in Hyderabad has always been a running machine. In this stadium, he owns a lot of records. Yesterday, the former Indian team captain played an outstanding knock. He scored 63 runs in 48 balls, including three fours and four enormous sixes. When Kohli was batting, the entire crowd was clapping for him. Literally Hyderabad people have owned Kohli. The star cricketer enjoys a massive fan base in the city of Nizam.

He scored 58, 34 runs in his first test match at this stadium. In his second Test match in Uppal, Kohli scored his most memorable 204 run kock and 38 runs in another innings.

The dashing batsman has played  three one day international matches at this stadium. He scored 37, 53 and 44 runs respectively in those matches.

The former captain played two T20I matches in Hyderabad and made two half centuries (94, 63) in those matches, which includes yesterday’s match.

Overall, Kohli hit 625 runs at an average of 89 over his seven international games in Hyderabad. The aforementioned statistics about Kohli’s success rate in Hyderabad speak for itself.

India defeated Australia 2-1 in the T20 series after yesterday night’s triumph. Before the T20 world cup, which is just 20 days away, Team India is getting a massive lift from Kohli and India getting back to winning ways.

Know All About the ‘Comedy Brahma’ Brahmanandam