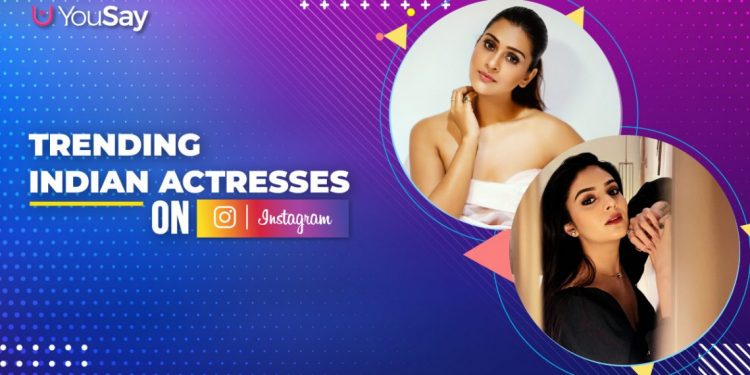 This week, the bubbly Tollywood actress/host celebrated her 29th birthday.

Sreemukhi celebrated her birthday with friends and family on May 10th. She posted a bunch of photographs of herself and her friends enjoying her birthday on Instagram. This small screen Ramulamma shook her legs to the ‘Bhale Bhale Banjara’ song, dressed casually in a pink dress. Her whole social media presence has gone viral.

In her most recent reel, Sreemukhi has gone full desi.

The actress is noted for having a high-octane personality. She made Desi dance moves to a viral track in her most recent Instagram post. Her audience were enthralled by the lovely beauty’s mass dance in traditional garb.

Also take a look at her special outfit for Mother’s Day.

The alluring beauty Payal Rajput always sets the internet on fire with her trendsetting reels. This Punjabi beauty is set to give a special performance in the upcoming episode of Zee Telugu Mahotsavam.

Payal recently posted a new reel in which she enters her caravan in an oversized yellow tee and denim shorts but comes out in angelic attire. Payal looks so elegant in a white embroidered lehenga. Her fans are blown away by her elegant look. Praising her look, one of her fans said, “Wow I see an angel here!”

In Payal’s next film, “Gali Nageswara Rao”, in which Sunny Leone also plays a major role, between the busy shooting, the three artists took their time out and came up with a hysterical reel that can make your day brighter. Check it out.

The powerhouse Kangana Ranuth had a busy week. Her upcoming film, Daakkad, was one of them. Kangana was playing the lead role in this film, and Arjun Rampal was playing her antagonist.

The hot actress never fails to set the bar with her hot looks. Laxmi Raai celebrated her birthday this week. Laxmi revealed a lot of surprises during her birthday week. A new music video of her’ DJ Been Bajade’ was dropped this week.

Evergreen beauty Shirya is enjoying her married life to the fullest. She frequently shares her cute daughter’s pics on Instagram.

Shriya, who was a trained classical dancer, never ended her love for classical dance. She was spotted performing Kathakali dance in her most recent Instagram reel.Her dancing skills awed her fans and friends. Shriya is currently in Mexico; she filmed the reel in an undisclosed location in Mexico.

The cute Nidhhi looks elegant in her new look. The actress was spotted at an event in a lilac feather gown designed by Chisel, aided by matching earrings and a parted hairstyle.

Nidhhi was roped in for a role in Pawan Kalyan’s next film, “Hari Hara Veera Mallu.”

Shraddha Das makes her fans go weak at the knees with her arousing looks. Her recent yoga session is making a stir among her male fans. Shraddha was filmed performing yoga in a supportive bra and a cotton short.

In another reel, Shraddha Das also paid tribute to her inspiration, Sushmita Sen. She appears in many looks in this reel.

Shraddha is making her comeback to the Telugu film industry with her next film, ‘Lechindi Mahila Lokam’. She has also appeared as the Judge on the Extra Jabardasth TV program.

The social media star’s new reel is a cool shower amidst the hot summers. Deepthi, dressed in a maxi dress, posed for photos while eating a sugar cane.Her clip was perfectly synced with ‘Vassivadi Thassadiyya from Bangarraju’.

“Me to Summer: Hey Hottayy,” she captioned her post.

In another post, she expressed her love for dance, writing, ‘When life gives you problems, sadness, stress, JUST DANCE.’

“Avunu” actress Purnaa is one of the most loved actresses in Tollywood. This actress’s recent reel for the ‘Dholida’ song from ‘Gangubai Kathiawadi’.

In a red saree paired with a sleeveless blouse, Purnaa amazed her fans with her classical dance moves in this reel. Praising comments from her fans flooded her post.

For over a month, newlywed Alia Bhatt has been surprising everyone.Bhatt was spotted in Doha for a store inauguration. Her caption hints that he definitely loved her trip and the hospitality of the Doha people.

In a golden-toned strapless midi dress, Tara makes a strong statement to her fellow stars and fashionistas. Her outfit, which is tailored to her figure, is gorgeous. The feathery hemline of the dress makes it stand out. Her outfit was enhanced with a pair of blingy peep-toes.

Sara is spending her summer vacation in Kashmir. She shared her vacation photos on her Instagram. Her humorous caption is worth reading.

Sara is enjoying her trekking adventures in Kashmir in the middle of the mountains.

Priyamani is more often seen on the small screen than on the silver screen these days, but she never fails to make her mark through her attractive looks.

Priyamani looks dashing in her latest photoshoot. In a colourful floral dress with untied silky hair, Priya looks stunning. She captioned her slew of photos. “Be a game changer in this world of copycats,” she captioned.

A funny reel from Priyamani

The supermodel Renu Kashal’s sensuous looks always drive fans crazy. Recently, she blessed her fans with a trendy dro. In an all-pink outfit with an unbuttoned shirt, Renu flaunts her curves.

Her fans went crazy over her post in the comment section. ‘Slaying Gorgeousness’, one of her fans wrote.

Tollywood’s Tejaswi is on the verge of changing her tag from cutie to hottie with her sexy swimsuit looks.

Tejaswi was spotted on an undisclosed beach. She dominates the beauty of nature with her flawless curves.

Sai Pallavi celebrated her birthday this week. This Malayali beauty announced two surprises on her birthday. The first was when she teased her upcoming film Gargi by posting a behind-the-scenes clip on her social media platforms.

Another one is that she officially announced that her next film will be produced by the legendary Kamal Hassan.

Anupama Parameshwaran, a Malayali beauty, enjoys a cult following among Telugu youth. Anupama always treats her fans with her entertaining reels. She was spotted in her workout avatar in her latest Instagram post.

Glamdoll Janhvi takes no leave to bless us with her alluring looks. Janhvi was recently clicked in a monochromatic shoot.

Janhvi was photographed off-screen with her make-up team and friends. Her beautiful smile will always be an added flavour.

Hansika, a stunning actress, is spending the summer in the Maldives.Her swimsuit looks are jaw-dropping. She shared a slew of her vacation pics. Take a look

Kaira is currently the busiest actress in Bollywood. All this week she’s busy promoting her next release, Bhool Bhulaiya 2.

As a part of the promotions, Kiara has shared a new video song from this film. Bhool Bhulaiya 2 stars Karthik Aryan along with Kiara. The film is set to hit theaters on May 20.