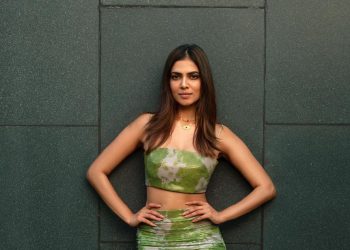 Glamour Doll Malavika Manohan is well-known for her attractive looks. Despite her Malayali roots, she mainly works in Tamil and Hindi films. With her fabulous presence, this elegant actress never fails to grab our hearts.

Malavika just posted a thread of photographs from her most recent photoshoot. Her monochrome shoot captures her innate attractiveness to perfection. In a white creped corset bodycon dress, she shows off her jaw-dropping curves. With her wavy hair and a few bangles on her left hand, the Maaran actress seems so natural in these uncolored images. She shields her cheeks from the sunlight, which can’t stop itself from kissing her. In the blink of an eye, her enticing beauty and beautiful smile can break a million hearts.

Here are some fabulous pics of this hot actress.

Malavika’s most recent project was the film Maaran, in which she co-starred with South superstar Dhanush. She is now collaborating with Siddhant Chatturvedi on the Hindi film Yudhra.

AICTE Is Set to Introduce Plumbing Course for the Engineering Students.

Rajasthan: On Their Anniversary, a Woman Killed Her Husband with the Help of Her Lover