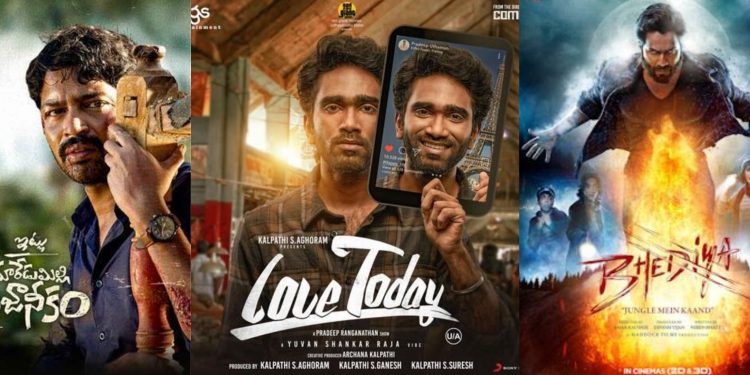 Some interesting films have been lined up for release this week in Tollywood. Allari Naresh is about to return to Telugu audiences after a brief absence, while Hindi and Tamil dub releases are also on the way. Check out the list of Telugu movie releases this week.

Allari Naresh is coming with yet another intriguing project ‘Itlu Maredumilli Prajaneekam.’ The flick directed by AR Mohan. It also stars Anandhi, Vennela Kishore among others in key roles.

Varun Dhawan and Kriti Sanon’s ‘Bediya’ is dubbed into Telugu as ‘Thodelu.’ The superhero fantasy movie is carrying huge expectations among the audience.

Pradeep Ranganathan’s starrer and directional venture ‘Love Today’ is dubbed into Telugu with the same name. The new age love story has created a sensation in Kollywood and is expected to create the same magic in Telugu states.

Dharma and Chandini Rao starred in Ranasthali, a gripping action packed drama. Parasuram Srinivas, the writer of Ashwadhama, made his debut as the director for this movie produced by Anupama Sureddy.