Swathi Muthyam Trailer : A Perfect Family Flick for this Dasara 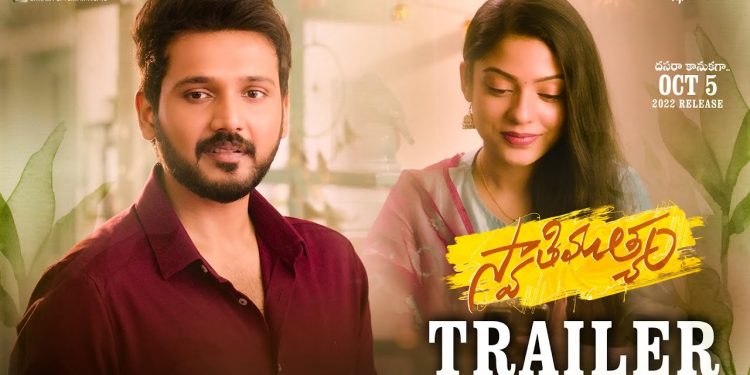 The trailer for the film ‘Swathi Muthyam’ was unveiled by the movie team a while ago at a formal event in AMB Mall, Hyderabad.

There is a fair amount of hype about “Swathi Muthyam” among the audience. Songs that have already been released have become chart-toppers. The lead roles in this movie are being played by the heroine Varsha Bollamma and the debutant Bellamkonda Ganesh. The plot and pure love tale in the trailer give it an amazing appearance.

The couple of Varsha and Ganesh steals the spotlight from the very beginning of the trailer. Ganesh and Varsha played an innocent middle-class couple who fell in love and desired to wed, but some unforeseen circumstances stood in the way of their marriage. The main narrative of the movie is revealed in the trailer.

Laksham K Krish’s directional film looks positive. The film’s creators assert that family audiences will adore it. On October 5th, Dasara Day, “Swathi Muthyam” will be released in theaters along with the biggies “Godfather” and “The Ghost.”

The flick is produced by Naga Vamsi under Sithara Entertainment banner. Mahanati Swara Sagar has composed the music for this film.