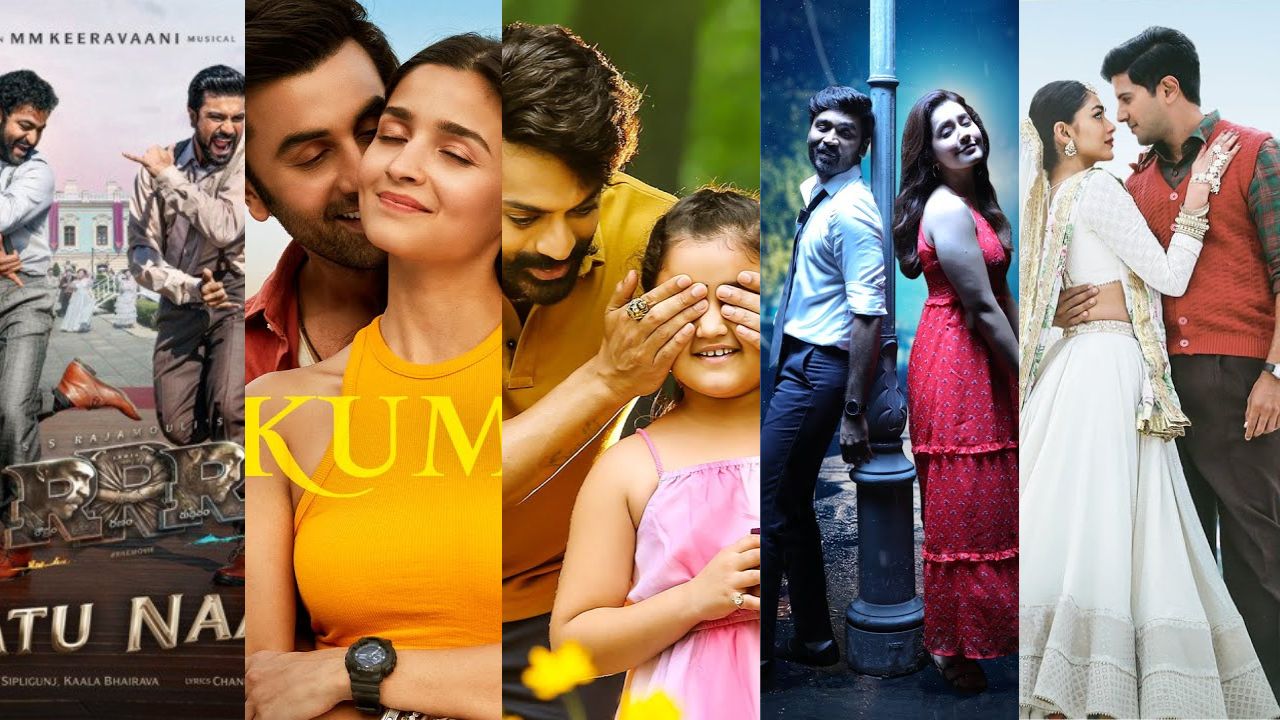 2022 has been a great year for Telugu music.  In keeping with “Pushpa’s” 2021 legacy, Tollywood has produced a number of beautiful songs this year. We witnessed a number of hugely popular music albums this year, including Sita Ramam, RRR, Radhe Shyam, and many others.

SPB Charan crooned his magical voice to this classic love track from “Sita Ramam.” Krishnakanth’s lyrics and Vishal Chandrasekhar’s music have made this magical track one of the best songs of the year.

Dulquer Salman, Mrunal Thakur and Rashmika Mandanna have played lead roles in this film which is produced by Swapana Dutt and directed by Hanu Raghavapudi. The film has emerged as a pan-Indian hit minting over 100 crores at the box office against a 17 crore budget.

Yuvan Shanker Raja’s soothing melody from “Radhe Shyam ” is a mega hit across all the languages. Although the film failed at the box office, the music is a big hit.

Pan-India Rebel Star Prabhas’ “Radhe Shyam” crashed badly at the box office, despite the strong openings the film managed to collect only 200 crores against 350 crore budget. This film is one of the biggest box office duds of this year. Prabhas fans are looking for a big comeback with the star’s next release ‘Salaar.’

The Sid Sriram and Thaman duo have delivered a solid smash hit this year with ‘Kalavathi’ from Mahesh Babu’s ‘Sarkari Vari Paata.’ This song is the biggest summer hit of 2022.

Mahesh Babu and Keerthy Suresh shared screen in the Parasuram directed movie ‘Sarkari Vari Paata.’ This film has been released to great expectations from the public but emerged as the above average grosser at the box office. Mahesh Babu is currently working on SSMB 28 which is being helmed by Tri vikram.

Ram Miryala’s desi voice, supported by telangana-rooted lyrics, has made the megahit “Tillu Anna DJ Pedithe” possible. This song was a sensation among the youth back in the first half of 2022.

Siddu Jonnalagadda’s ‘DJ Tillu’ is the first blockbuster for Tollywood in 2022. Neha Shetty played the female lead in this film which is directed by Vimal Krishna. The sequel for this film is currently in works.

The emotional song from RRR can bring tears to your eyes. The hard-hitting lyrics and breathtaking performances from the actors have made this song the most-viewed song of the year.

Rajamouli’s magnum opus “RRR” is on the verge of fulfilling the million dreams of Indian movie buffs, the flick is front runner for an Oscar nomination as per many credible sources. RRR’s success in the west is indescribable, the film is lauded by the Hollywood media and audience. Recently the film also has been nominated for Golden Globe awards in two categories.

Musician Kala Bhairava made a big statement with his extremely popular album “Karthikeya 2.”  Krishna Trance, a song from the movie, will send you into a deep relaxation thanks to its magnificent musical composition.

Nikhil Siddarth and Anupama Parameshwaran starrer ‘Karthikeya-2’ is another surprise pan-India hit from Tollywood. The film has been lauded by the audience across all languages for its intriguing plot which deals with the themes of lord Krishna.

Kukumumala, the Telugu version of “Kesaria,” has successfully reprised its magic in Telugu. The soul-soothing melody was sung by Sid Sriram in Telugu.

Probably ‘Brahmastra’ is the most loved Hindi dubbed film in Telugu states recently. The film emerged as a blockbuster in Telugu states by collecting over 25 crores at the Telugu Box office. The film has crossed the 450 crore mark in global revenue. The makers are currently working on the second part ‘Dev’ from the Brahmastra Universe.

A soul-soothing love letter from SPB Charan and the Sita Ramam team. This single has made everyone go gaga over this timeless tale of love.

‘Sita Ramam’ is widely lauded as the modern day classic by movie geeks. Director Hanu Raghavapudi has exhibited his craft as a filmmaker with this iconic film. Dulquer Salman, Mrunal Thakur and Rashmika Mandanna have played lead roles in this film which is produced by Swapana Dutt. The film collected over 100 crores at the box office.

The rhythms of Keeravani’s “Natu Natu” got the entire country moving to its heart-pounding tempos. On this tune, NTR and Ram Charan’s unique moves have become an international sensation.

Natu Natu madness has been evident around the world after the release of ‘RRR.’ The film is one of the biggest successes in the west, for over 15 weeks it stayed as the most popular non-English film on Netflix. ‘RRR’ has netted over 1200 crores at the global box office.

Another crowd pleaser from the crooner Sid Sriram. Though the film was not a major hit, this song alone has brought immense popularity to the film. The track is one of the best love anthems of 2022.

Aadi Sai Kumar’s struggle for success still continues but the actor had some good moments in 2022. The song ‘Baguntundi Nuvvu’ will definitely come on top of his best moments of the year. Hope the actor finds success in the following year.

The romantic-dance track from Ori Devuda ignited the last months of 2022. Star musician Anirudh has lent his voice for this lovely track. This song is quite famous on social media and in reels.

Vishwak found success with ‘Ori Devuda’ this year, though the film is a remake of a Tamil film audience have loved the film and the performance of the lead cast. Mithila Palkar, Asha Bhatt and Venkatesh have played lead roles in this film.

Bullet ( from The Warriorr)

Tamil star Simbu has sung an energetic, leg-shaking single for Ram’s film. STR’s captivating voice and Ram’s exhilarating dance moves have made this a celebration track for 2022.

Ram Potheneni’s much anticipated ‘The Warriorr’ has been a biggest disappointment. However, the music of this film was received very positively by the audience. Ram is now hoping to make a big comeback with his film with director Boyapati Srinu.

Whistle ( from The Warrior)