This Dasara season turned out to be a disaster for Tollywood in terms of business. 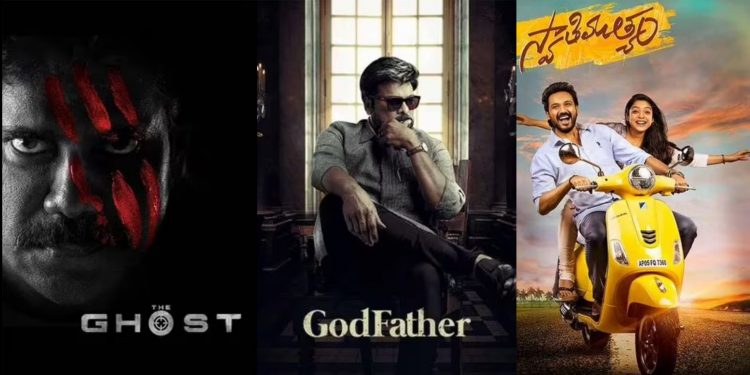 One of the busiest times of year for movies in Telugu states is the Dasara season. Many major filmmakers reserve their release dates for this season in advance each year. During the holiday season, big movies frequently cash out for enormous sums of money. This Dasara season saw the release of two high-profile movies and one low-profile movie. “Godfather,” starring Megastar Chiranjeevi, “The Ghost,” and “Swathi Muthyam” are among the films on the schedule.Leaving aside “Swathi Muthyam,” the audience and producers had high hopes for both Nagarjuna and Chiranjeevi’s movies before they were even released.

The movies did not appear to live up to expectations at the box office, though. From the start, each of these movies has underperformed. Though Chiranjeevi’s “Godfather” is performing quite well at the box office, trade and the general public had higher expectations. However, the box receipts for “The Ghost” and “Swathi Muthyam” absolutely bombed. Despite receiving great reviews, the general public exhibited no interest in Nagarjuna’s movie. The movie “Swathi Muthyam” did not bring in any respectable money.

Considering the box office revenue of these three films till today, no film has fetched profits. Until today, “GodFather” had made less than a 60% recovery. “The Ghost” and “Swathi Muthyam” have made less than 25% and 10% recoveries, respectively. The figures hint that all these projects will end up as loss-making ventures for distributors and exhibitors.

A brother from Andhra Pradesh marches to Delhi in a bullock cart in search of justice for his sister.