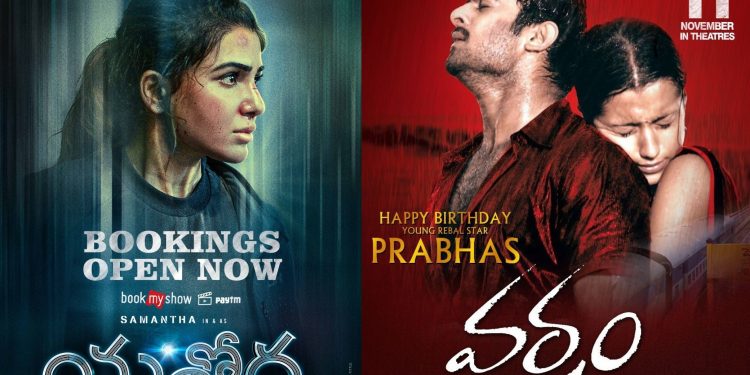 This week’s theatrical releases include Samantha’s comeback flick “Yashoda” and Prabhas’ re-release “Varsham.” Along with these four small-budget films, others are releasing this week. On OTT, many interesting movies are about to debut this week on many platforms. Take a look.

Samantha is coming back to the big screen with a physiological thriller called “Yashoda.” The plot of Yashoda is inspired by real-life events that revolve around surrogate mothers. This film has huge expectations among the audience. Despite being ill, Samantha is involved in the promotions of this flick, which is directed by the duo Hari and Harish.

Rebel star Prabhas’ vintage blockbuster “Varsham” is re-releasing in theatres this Friday on the special occasion of Prabhas completing 20 years in Tollywood.

‘Jabardasth’ fame Adhire Abhi and Amiksha Pawar crime drama thriller will test its luck at the box office. The thriller is written and directed by Sathyanarayan Ekari.

‘Magadheera’ fame Dev Gill played the lead role in the film ‘Clue.’ Shayaji Shinde also plays a key role in this film. The trailer of this film has captivated the audience.

Mahesh Yadlapalli is all set to entertain the audience with his comedy drama Kaadhal Kahaani which is heading for release on this friday.

Why did Kriti Shetty burst into tears on TV?