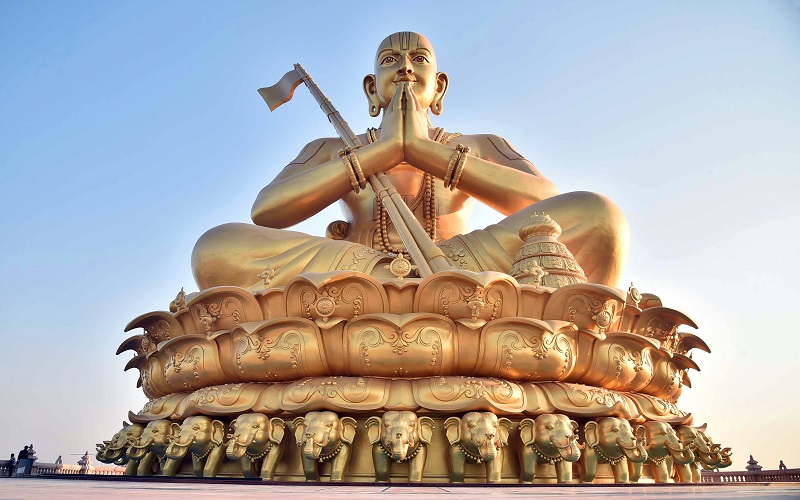 Come February 5 and the Hyderabad skyline will be decorated by the 216-foot statue of the 11th-century saint and social reformer Ramanujacharya. None less than PM Modi himself will be unveiling the statue on February 5. After the inauguration of the world’s tallest statue, the Statue of Unity, at the Sardar Sarovar Dam, the Ramanujacharya statue has been the focus of considerable attention.

The statue that costs as much as Rs. 1000 crores, has been funded entirely by donations from devotees of the Vaishnavite saint from around the world. What is remarkable is that the inner sanctorum deity of the saint is crafted from 120 kilograms of gold to commemorate the 120 years the saint walked the earth.  This statue has the unique distinction of being one of the tallest statues anywhere depicting a sitting posture.

The statue and the entire complex surrounding it exudes both a very serene and imposing aura and are sure to be a huge draw both for devotees and tourists and will no doubt become one of the major must-visit destinations in Hyderabad. There is a sense of palpable excitement amongst the denizens of Hyderabad about the impending inauguration of the statue. It will be a very welcome addition to the landscape of the great city of Hyderabad and a worthy tribute to the great saint and social reformer who lived and preached in this very land a thousand years ago.